<![CDATA[ <p> Rapid7 offers the best vulnerability management software in the market either with Nexpose ( https://www.rapid7.com/products/nexpose) fully on-prem solution or with cloud-powered on-prem InsightVM (https://www.rapid7.com/products/insightvm ). Cloud powered means some of the features are in the cloud while the Console and if required Scan engines are installed on-prem

Most of the cases you will use Virtual Image is it is already pre-made and pre-hardened for you. While it is a single OVA file it is updated every 2-3 weeks with latest software and vulnerability checks. Generally you will prefer virtual image for your Consoles and Scan Engines.

Installation steps of the Virtual Image of either Nexpose or InsightVM can be found at https://kb.help.rapid7.com/docs/insightvm-and-nexpose-virtual-appliance-guide . All virtual images of Nexpose/InsightVM. Nexpose/InsightVM Console – which contains 1 internal Scan Engine- or Nexpose/InsightVM Engine is Ubuntu 16.04 LTS based (Rapid7 also base images on updated OS like 16.04.5 right now so less effort to update OS)

Sometimes as our ICT infrastructure grows the virtual disk that comes with IVM/Nexpose may no be enough which by default it comes with 100 Gb of 1 virtual Disk Image: 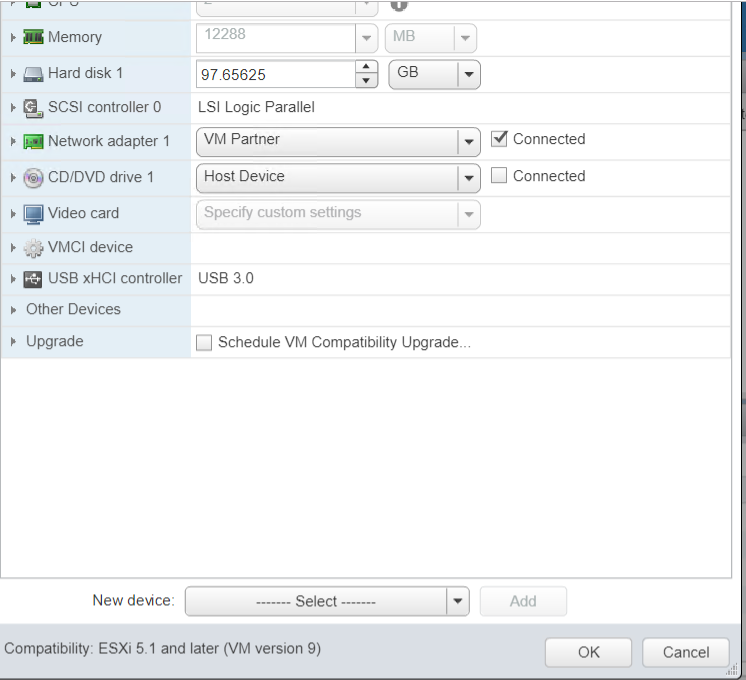 As you can see there is only 1 disk around 100 Gb. On Linux we can verify this as root like issue “fdisk -l /dev/sda” command to see disk and its partitions as root user

At above screenshot there is 2 important partition / and /opt. Rapid7 software installed on /opt and other OS files are located at / partition. Also physical disk partitions (like /dev/sda5) are not directly mounted (aside from /dev/sda1 which is mounted on /boot to keep kernel images and Grub loader etc).

To better visualize what is happening with LVM is: 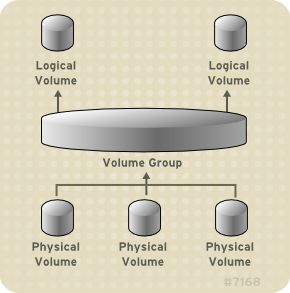 Since our aim is to extend /opt which Rapid7 software resides in /opt/rapid/nexpose (even for InsightVM) directory.

For this first we need to add a new disk on virtual Image. Also you can extend first hard disk it is more convenient to add a new disk instead of extending an existing disk as it involves more steps and more risky. So our aim is to add Second hard disk on Vmware Virtual Image of Rapid7 software. Size depends on your requirements but for a prod environment it will be good to at least add 100 GB hard disk. In our case we will be adding only 15 Gb to show it . 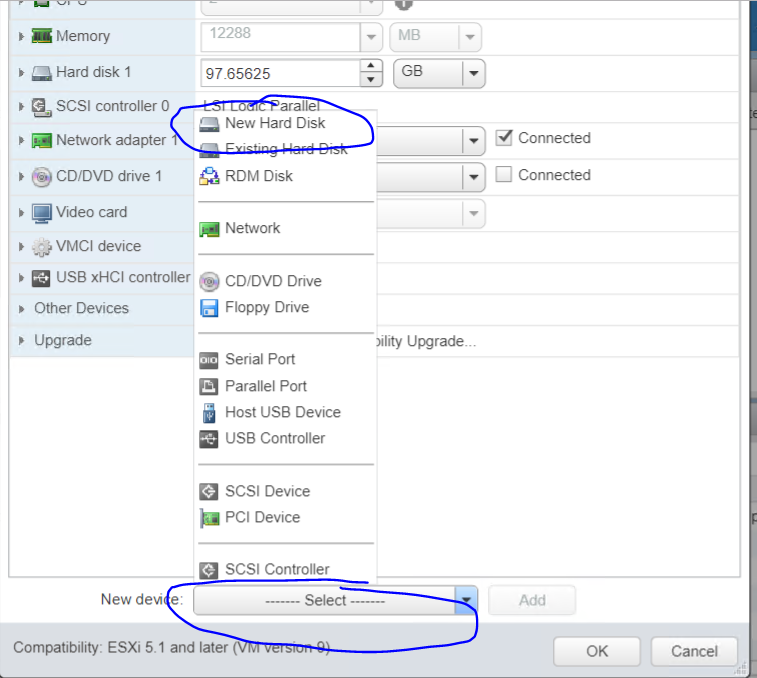 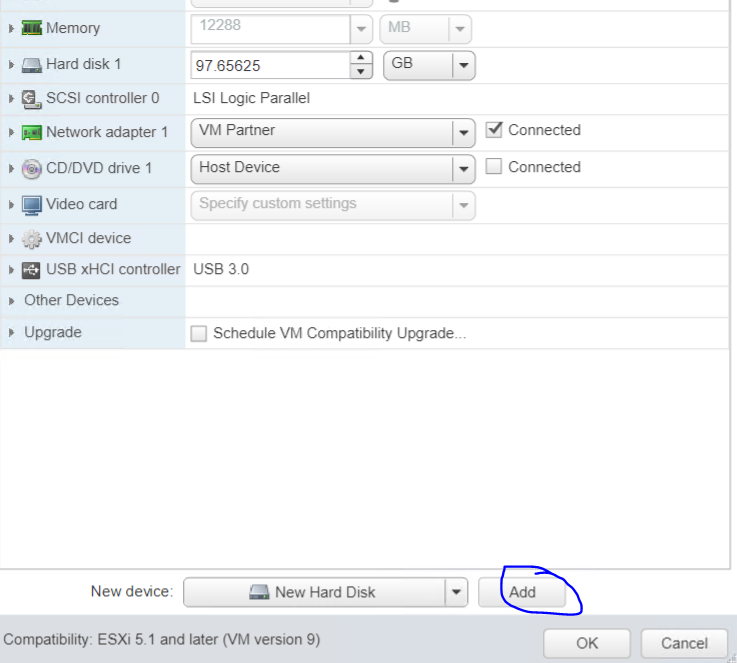 Give it a size (In your case you should at least add 100 Gb to be on the safe side. We are only adding 15GB) 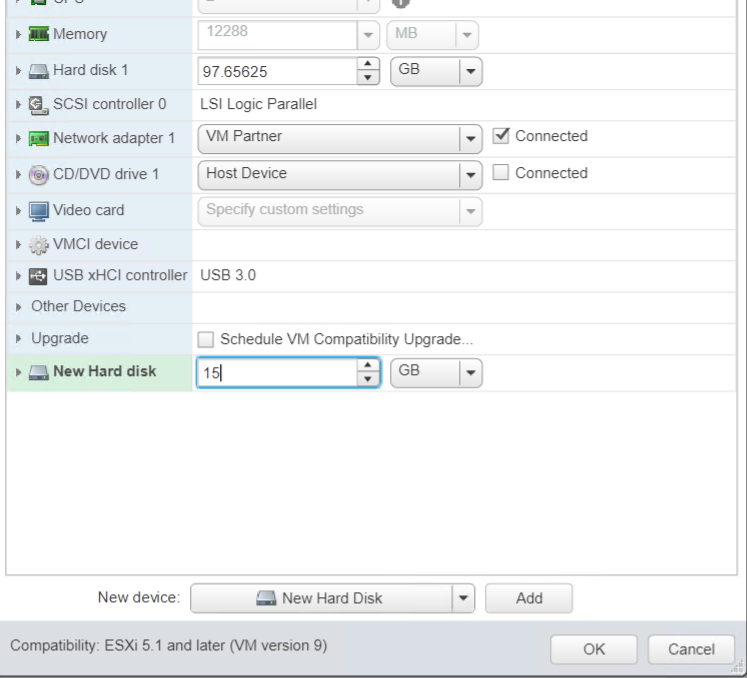 After we go back we will use fdisk -l and will see if our new partition is detected as root user. Below can show you that even we added second hard disk it was not detected by OS as /dev/sdb which is second SCSI/SATA disk. 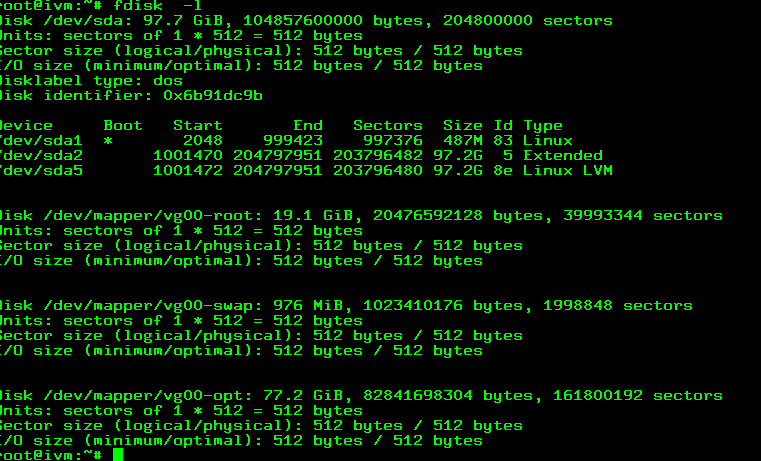 Here we need to install a package to Ubuntu our Linux server. Package is called “sg3-utils”. You can do this with “apt-get install sg3-utils”. That will only work if you have internet access. You need to b e root to run this command.

After that now there is a script comes with this package called “rescan-scsi-bus.sh -a ” . This script will scan all your IO devices and add corresponding /dev entry so we can see /dev/sdb as our new hard disk. You need to run this command as root. 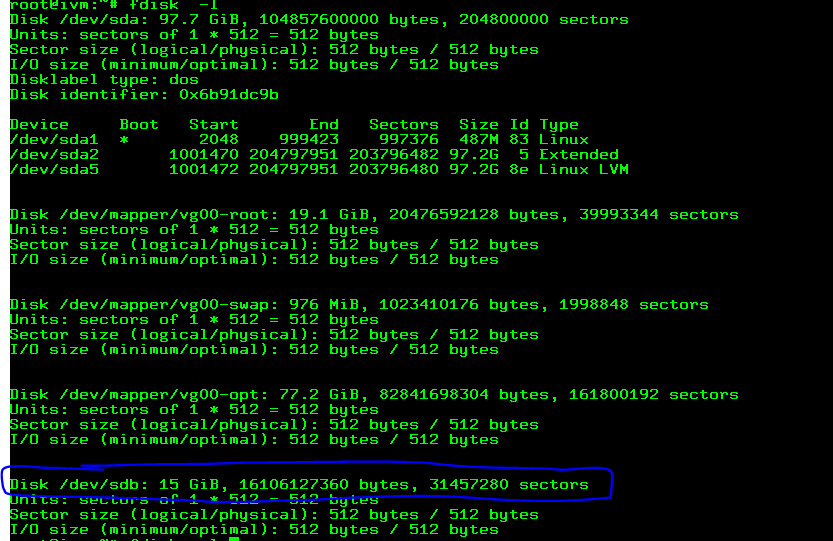 If you don’t have internet access you can manually download sg3-utils package from https://packages.ubuntu.com/xenial/admin/sg3-utils and upload it and use “dpkg install *.deb” to install package but also you can use following command to scan SCSI BUS to rescan available devices again as root (this can eliminate requirement for sg3-utils package)

Before going further you should snapshot your virtual image as things from now on (if you don’t be careful enough can damage your filesystems which all your data you may lose). We do NOT accept ANY responsibility but these steps are done in our lab step-by-step without any issues. For this go to virtual machine on Vmware go to “Snapshots” and click on “Take Snapshots” 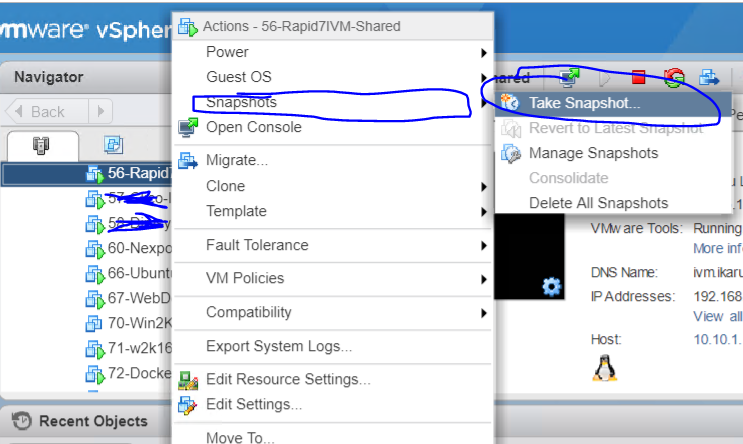 On new menu write a description and click “OK” 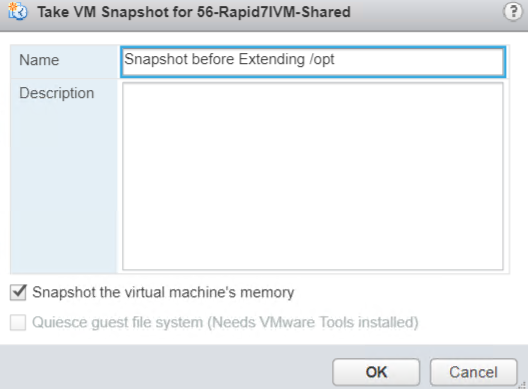 Wait until snapshot finishes and go on.

After taking snapshot (As a precaution) new need to create a LVM type partition on /dev/sdb (which basically will create /dev/sdb1 of type Linux LVM). Commands we typed are shown bold

So a sample session would be 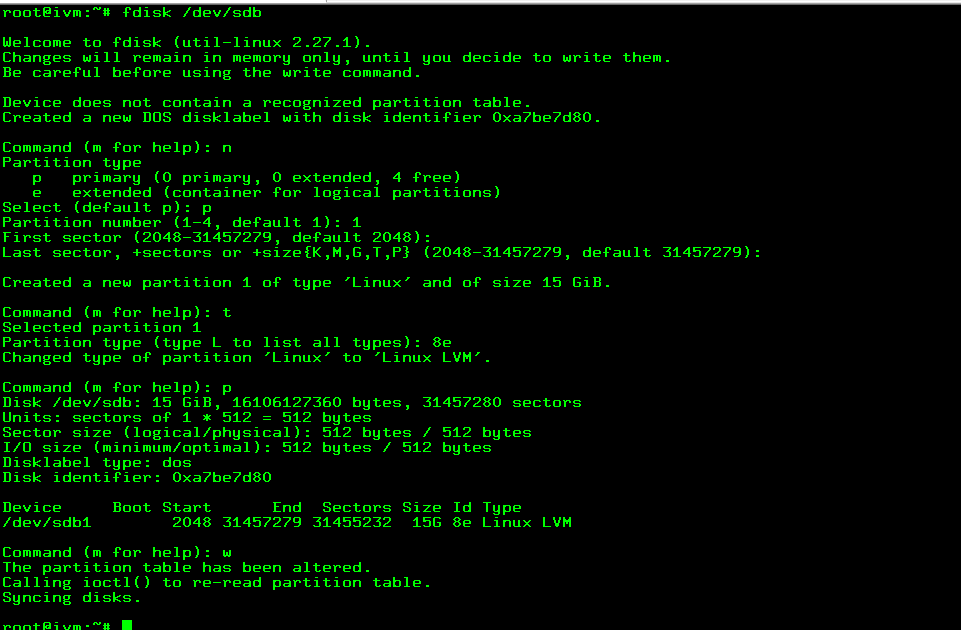 Now since we have written changes on disk lets verify it with “fdisk -l /dev/sdb” command. Sample out must be like this:

Now the LVM part comes in. So we need to make this /dev/sdb1 as usable in LVM. We as root user will issue

After this step we need to add this /dev/sdb1 LVM partition to our Volume Group (VG) named vg00 so we can extend Logical Volume (LV) named opt . So first lets add it to vg00 VG

Now we extend opt LV by the size of /dev/sdb1

A sample one would be

And let we check the size of /opt partition

As you can see it is still not resized. There is two more step we need to use first to detect partition type of /opt (filesystem that is used for opt)

Now for ext4 (or ext filesystem) we use “resize2fs” command like:

As you can see it is resized and lets check it with df -h command like: